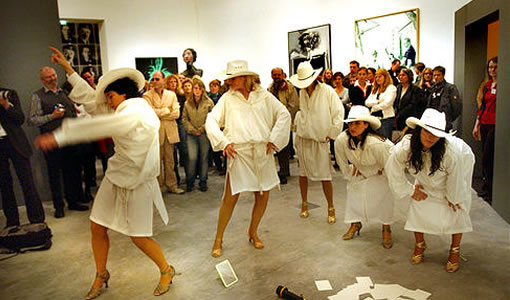 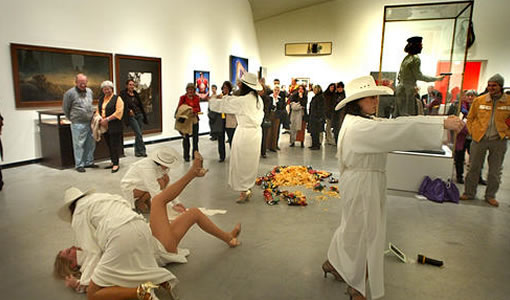 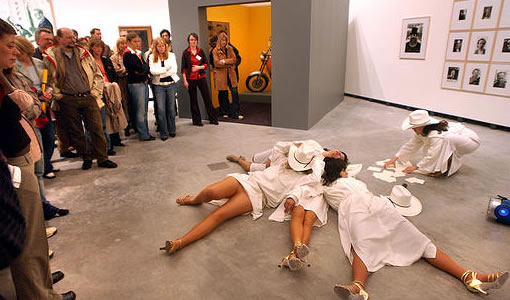 “The best of both worlds” is a great song by the late Robert Palmer – God bless his white soul! – but it is also an expression that could easily be applied to “Best Of”, a collaborative project authored by Alexandra Bachzetsis and Anat Stainberg in which four fair maidens (one world, in Palmer’s parlance) assault the senses of an opening night audience in an art museum (the other world, in my view). The notion of ‘assault’, incidentally, is not a casually chosen one, as “Best Of” is clearly indebted to the hallowed tradition of artist ‘interventions’ along situationist or guerrilla warfare lines – a tradition that immediately brings the powerful historical example of the Guerrilla Girls to mind. But whereas the mighty Girls famously dressed up in gorilla costumes (that is to say, masks) and tirelessly dispensed punitive tidbits of unquestionable feminist wisdom, the raucously gaudy outfits donned by this contemporary quartet – obviously still feminist, but perhaps less naively, less righteously so – suggest a wholly different, slightly camp-infused agenda. Or what are we to make of their skin-coloured ballet tights, glitzy ballroom dancing shoes, white djellabbas held together with bits of white rope (procured in a specialty bondage shop!) and gleaming white cowboy Stetsons? Bachzetsis & Stainberg’s bizarre disturbances are meticulously choreographed however: all four performers carry a stack of placards with them on which certain words are written, such as ‘bow’, ‘laugh’, ‘welcome speech’, ‘pirouette’ and the like. They operate as staccato commands that help to manoeuvre the unruly foursome through the organic mass of an unknowing art crowd, creating both spaces for impromptu movement and, inevitably, dismay and surprise among an audience less accustomed to ‘live’ art: whenever one of the ‘dancers’ takes out one placard and, like the proverbial bikini-clad pin-up in a boxing ring, holds it out in front of her, she laconically performs the task at hand, sometimes in accidental unison with a similar task performed by one or more of her colleagues, sometimes in sharp and jarring contradiction. Treating the whole of the museum or art gallery space as its possible stage, this colourful armada is relentlessly driven forward by one single track booming out of a tinny ghettoblaster – Snoop Dogg’s anthemic “Drop It Like It’s Hot”, which may indeed be dropped for no less than a continuous seven hour spree. Indeed, how guerrilla warfare has changed…